Along with container images, filesystems are one of the building blocks of the Dagger platform. They are represented by the dagger.#FS type. An #FS is a reference to a filesystem tree: a directory storing files in a hierarchical/tree structure.

Filesystems are key to any CI pipeline, and Dagger is no exception. CI pipelines, at their core, are just a series of transformations applied on filesystems until deployment. You may, for example:

Each of these use cases requires a change or transfer of data, in the form of files in directories, from one action/step to another. The dagger.#FS makes that transfer possible.

You need an understanding of how Dagger filesystems relate to core Dagger actions and container images to fully benefit from the power of Dagger.

Dagger leverages, at its core, a low level API to interact with filesystem trees (see reference). Every other Universe package is just an abstraction on top of these low-level core primitives.

core.#Mkdir is the dagger equivalent of the mkdir command: it takes as input a dagger.#FS and retrieves a dagger.#FS containing the newly created folders.

Inspecting the docker.#Image package is a good way to grasp the relation between filesystems and images:

Many Universe packages don't accept filesystems (dagger.#FS) directly as input, but rely on images (docker.#Image) instead, to let users specify the environment in which an action's logic will be executed.

As you can see, docker.#Image and dagger.#FS are closely tied, since an image is just a filesystem (rootfs) together with some configuration (config).

Since every docker.#Image contains a rootfs field, it is possible to access the dagger.#FS of any docker.#Image. This is very useful when copying filesystems between container images, passing an #FS to an action that requires one, or exporting the final filesystem/files/artifacts after a build to use with other actions (or to save on the client filesystem).

The corollary is also true: from a given filesystem, building up a docker.#Image is possible (with the help of the dagger.#Scratch type and some core actions).

Learn more about the docker package

Let's explore, in-depth, how to transfer filesystems between actions.

Topology of a Universe action (from an #FS perspective)​

As stated above, most of actions require a docker.#Image as input. As an image contains a rootfs, the first #FS of an action is its rootfs. As some actions create artifacts, these computed outputs are a second type of filesystem living inside the rootfs.

Lastly, some filesystems need to be shared between actions, and only need to live during the lifetime of its execution logic. This is the last type of filesystem that you might encounter: for the sake of the guide, let's call them additional filesystems.

Transfer of filesystems via docker.#Image​

As most of Dagger actions run within a container image, an easy way to transfer an fs is to make the output image of an action the input of the next one. In other words, to make the state of the rootfs after execution, the initial rootfs of my second action. 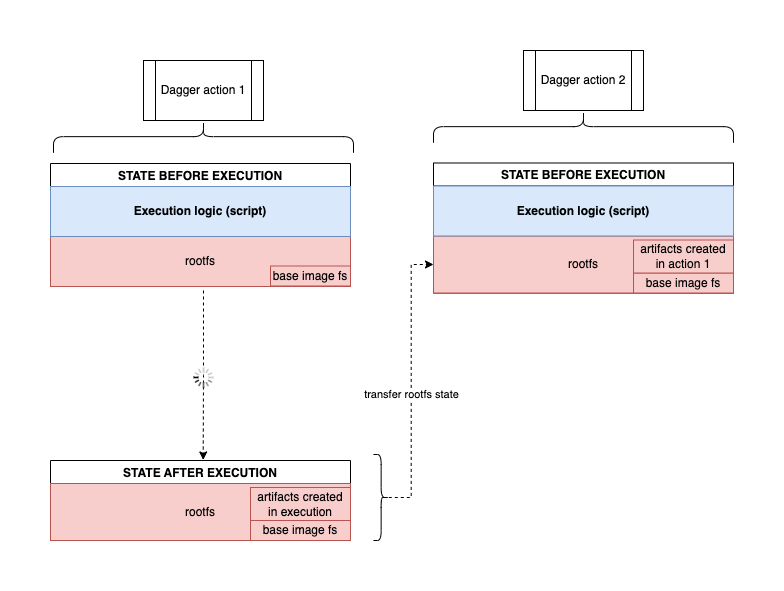 A common use-case is to create an action whose sole purpose is to install all the required packages/dependencies, and let the next action execute the core logic: 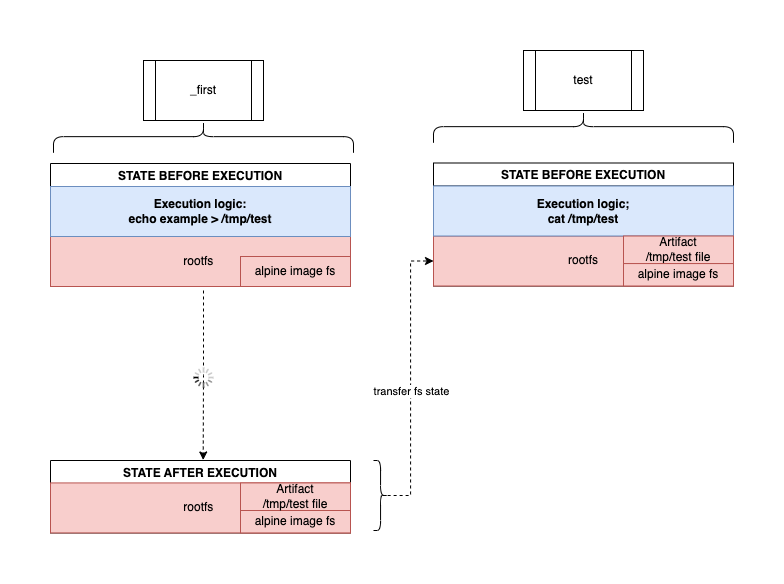 Transfer of #FS via mounts​ 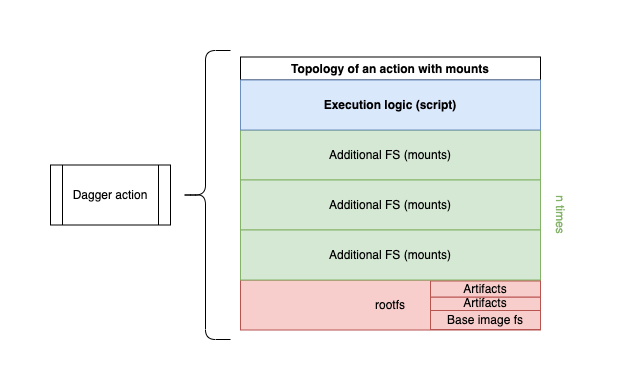 Difference between a Docker bind mount and Dagger mounts​

Dagger mounts are very similar to the docker ones you may be familiar with. You can mount filesytems from your underlying dev/CI machine (host) or from another action. The main difference is that Dagger mounts are transient (more on that below) and not bi-directional like "bind" mounts. So, even if you're mounting a #FS that is read from the host system (client API), any script interacting with the mounted folder (inside the container) writes to the container's filesystem layer only, and the writes do not impact the underlying client system at all. 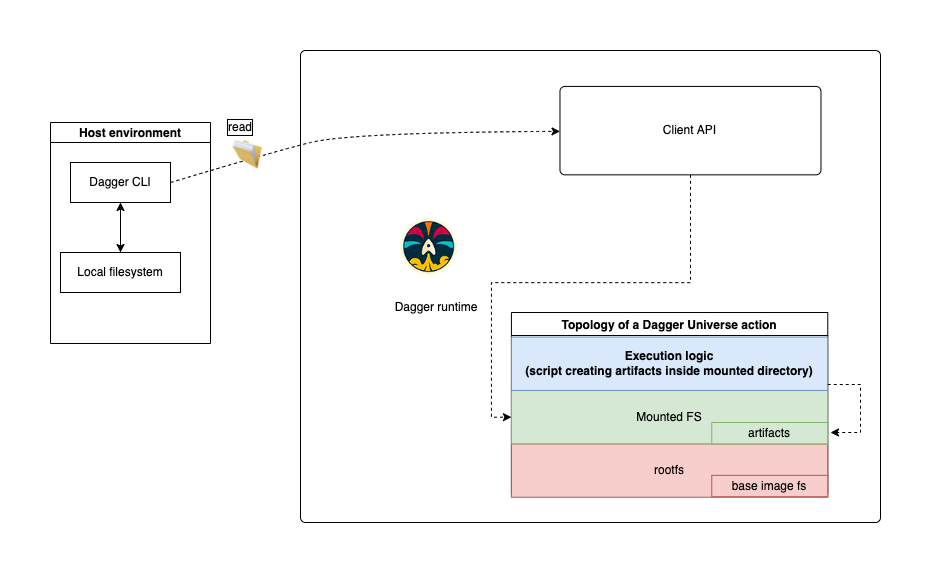 Whether you mount a directory from your dev/CI host (using the client API), or between actions, the mount will only be modified in the context of an action execution.

However, if your script creates artifacts outside of the mounted filesystem, then it will be created inside the rootfs layer. That's a great way to make generated artifacts, files, directories sharable between actions.

Mounts are not shared between actions (transient)​

In Dagger, as an image is only composed of a rootfs + a config, when passing the image to the next action, it loses all the mounted filesystems: 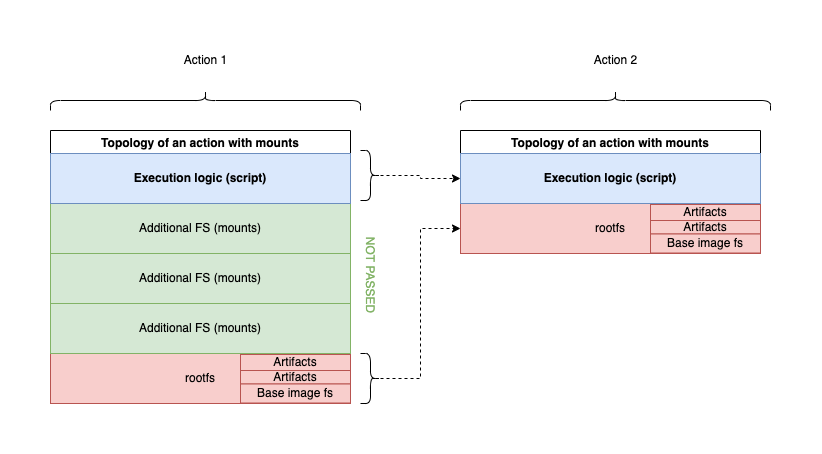 Exports in Dagger only export from a rootfs. As mounts do not reside inside the rootfs layer, but on a layer above, the information residing inside a mounted filesystem gets lost, unless you mount it again inside the next action.

When mounting filesystems on top of a preexisting directory, they are temporarily overwritten/shadowed. 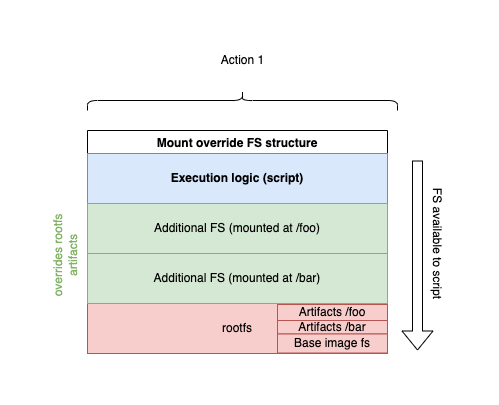 In above example, the script only has access to the /foo and /bar directories that were mounted, as the artifacts present in the rootfs layer have been overshadowed in the superposition of all layers.

Below is a plan showing how to mount an FS prior executing a command on top of it: 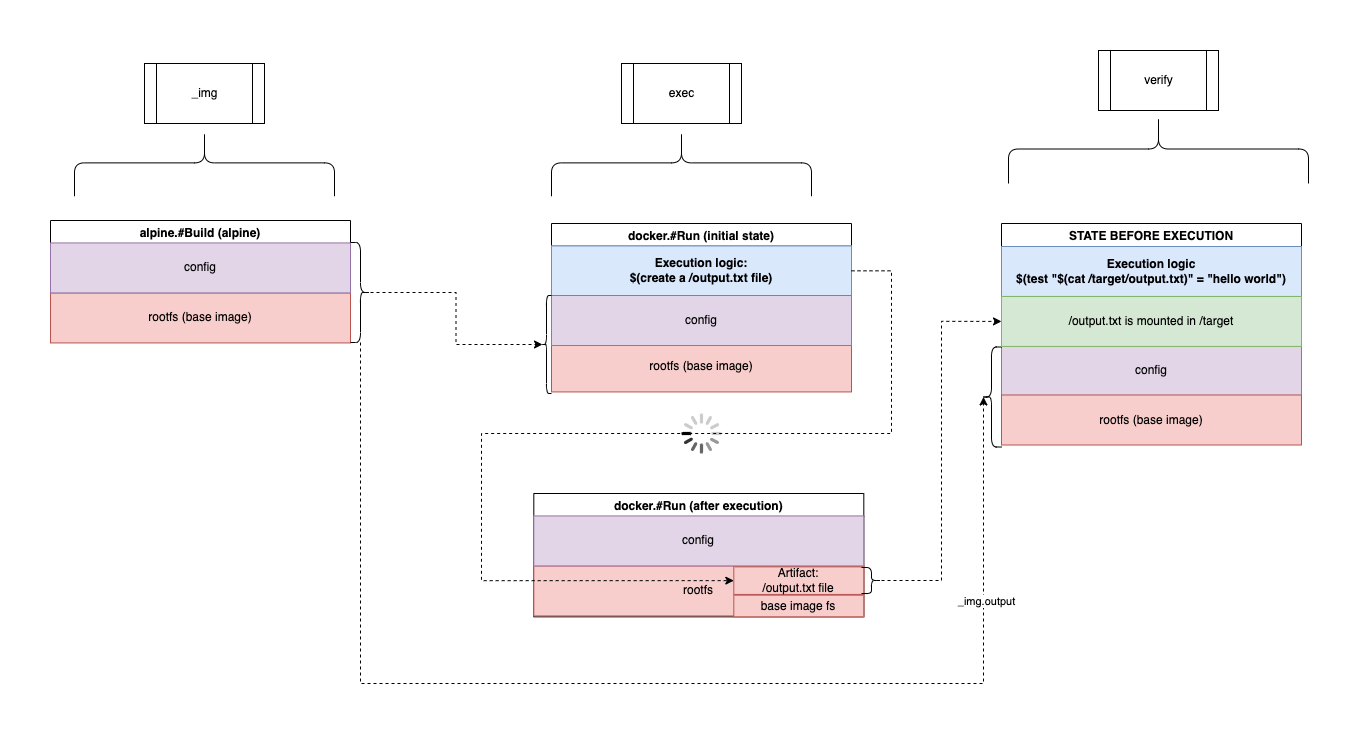 As mounts only live during the execution of the verify action, chaining outputs will not work.

Mounts are very useful to retrieve filesystems from several previous actions and use them together (to execute or produce something), as you can mount as many filesystems as you need.

Transfer of #FS via docker.#Copy​

The aim of this action is to copy the content of an #FS to a rootfs. It relies on the core.#Copy action to perform this operation:

Let's take the same plan as the one used to previously show how to mount a dagger.#FS. In this example, we will rely on the docker.#Copy instead of the mount, so the #FS is made part of the rootfs and can be shared with other actions:

The verify action does not have any mount, and instead has access to the /target artifact from the exec action due to the docker.#Copy (_copy action).

Example plan to read an #FS from the host​

Below is a plan showing how to list the content of the current directory from which the dagger plan is being run (relative to the dagger CLI).

This example uses the client API, but if you only need access to files within your Dagger project, core.#Source may be a better choice. 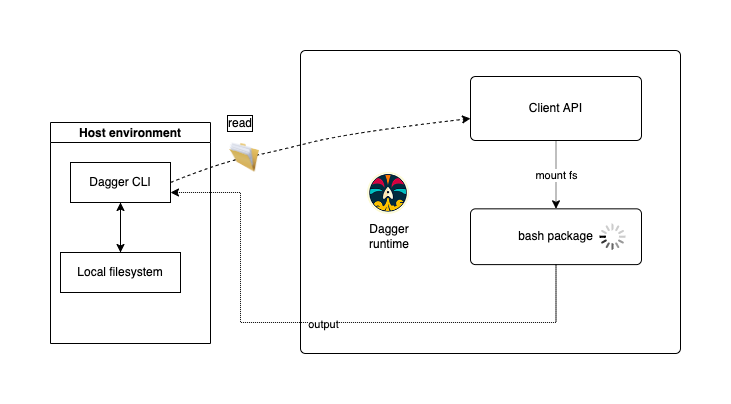 Example plan to write an #FS to the host​ 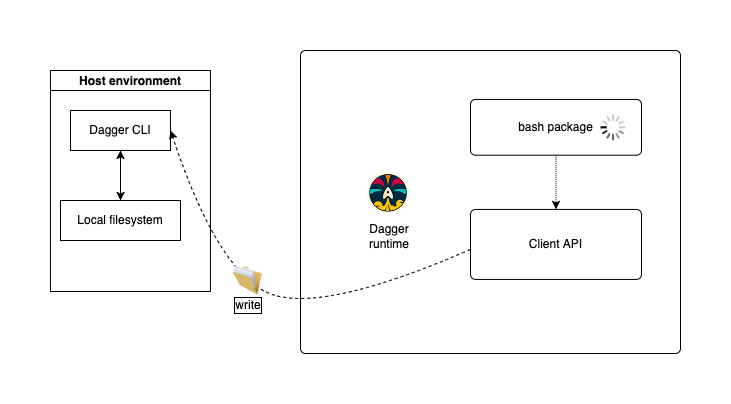 More informations regarding the client API